Time To Change, a growing social media movement run by charities Mind and Rethink Mental Illness, is using powerful and thought-provoking tactics to remove the stigma of talking about mental health, especially in men.

Many people feel ashamed or embarrassed discussing mental health problems, despite 1 in 4 people experiencing mental health issues every year. Time To Change is a campaign which aims to change people’s attitude regarding mental health, breaking the silence and shame around the subject, making it a topic that people can feel more comfortable discussing. 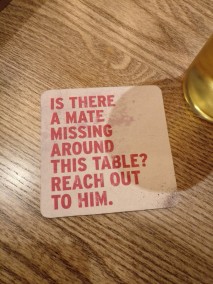 Photos of coasters with messages reading “Is there a mate missing around this table? Reach out to him.” And “If your mate’s acting differently it could be a sign of a mental health problem: reach out, be yourself, do what you love together” have taken social media by storm, creating a surge of positive comments from thousands of Twitter users. 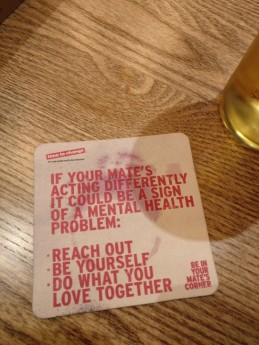 Campaigns like Time To Change are at the forefront of eliminating the misconceptions of mental health problems, urging the public to get involved and speak out. Already over a million people have taken action and contributed to the movement of changing the way people think and act about mental health problems.

Many lives are lost to suicide. Encouraging men to talk about how they’re feeling and what they’re going through can contribute towards prevention; it can stop people from feeling isolated and alone whilst struggling with mental health issues.

From a public relations perspective, the Time To Change campaign has been incredibly effective in raising awareness of the movement through its strong and memorable messages, tackling issues that have been previously unmentioned in society.

No matter how much time you have, getting involved is simple. Whether this is having an honest conversation with someone, blogging about it, or contacting the media and telling them your story, every little thing contributes towards breaking the barrier of combating mental health. To see how you can get involved, visit https://www.time-to-change.org.uk/get-involved.