A trend that companies seem to be using a lot recently is considering their corporate social responsibility. CSR is an organisations defined responsibility to its society and stakeholders. This is because companies are part of an infrastructure of society and as such they must consider their impact on it. A perk of being more CSR conscious means it evokes positive awareness for the company’s name and means they can obtain good press from the media.

But is there a level of authenticity in the good deeds companies do? Or is it simply due to companies wanting to be perceived in a certain light to their customers? And surely as companies become richer and richer, they have little excuse to not ‘spare a penny for the poor’.

Hertzberg’s theory helps us explain why people might review CSR cynically. His proposal can be illustrated with the simple example of a having a shower; people have them naturally, with the intention of being hygienic. However, after having the shower, it doesn’t cleanse you or make you a good person. You’re just being considerate of others around you, as you don’t smell. In a similar sense, you could compare this idea to how companies look at charities. Realistically they have enough funds to donate to the charity, so donating the money doesn’t need to be showcased to the world. Just like a person doesn’t need to show off to the world at them having a shower, it just clearly the morally correct thing to do.

A country that has taken a different approach to companies using CSR is Norway. Their government website states:

‘The Government expects all Norwegian businesses to exercise corporate social responsibility, whether they are state-owned or privately owned, and whether their activities are in Norway or abroad.’

Thus implying that it should just be part of every company’s culture to donate to charity, which in my opinion is how it should be in the UK. 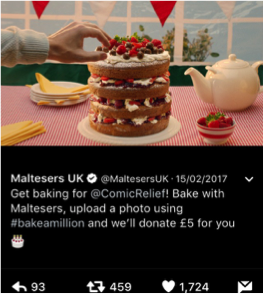 Comic Relief. Despite the charitable deed is very kind of Malteser to donate £5 per photo. Some may see the advert as commercialising on charity’s name. As it is Malteser which will be reaping the benefits of people buying the chocolate to bake with the cake. However, the task of baking a cake, does bring a family together which is something that Comic Relief builds its identity around.

Stella Artios is another company that is using a charitable team up to engage customers to buy their beer. As their new advert claims they donate 47p but in comparison to the £10 they charge for the pack the donation doesn’t seem that generous.

A benefit of CSR is that it can lead consumers to believe that the products of companies engaged in socially responsible activities are better performing. As they have to be making successful turnovers, to have extra money to spend on helping the less fortunate.

In an article that featured on marketingweek.com Stella Artois’s senior brand manger, Rowan Chidgey believes that “The younger consumer wants to know how they can leave a mark. It isn’t about being political but knowing that by supporting a brand they can make a difference to the world.” So could this be the reason behind the recent popularity for the CSR trend? Do companies just want to appeal to a generation that wants to help with change? Would you personally buy a product because it was donated a fraction of what you paid to charity?