Brands use Instagram to not only gain their following but to promote and sell their products. The two main ways that this is done is by influencers posting about using the products or using a discount promotion code. A discount promotion code is normally linked at the end of an Instagram post with hashtags, but, how useful is this really at selling products? Could this be the most modern way for marketing in public relations? 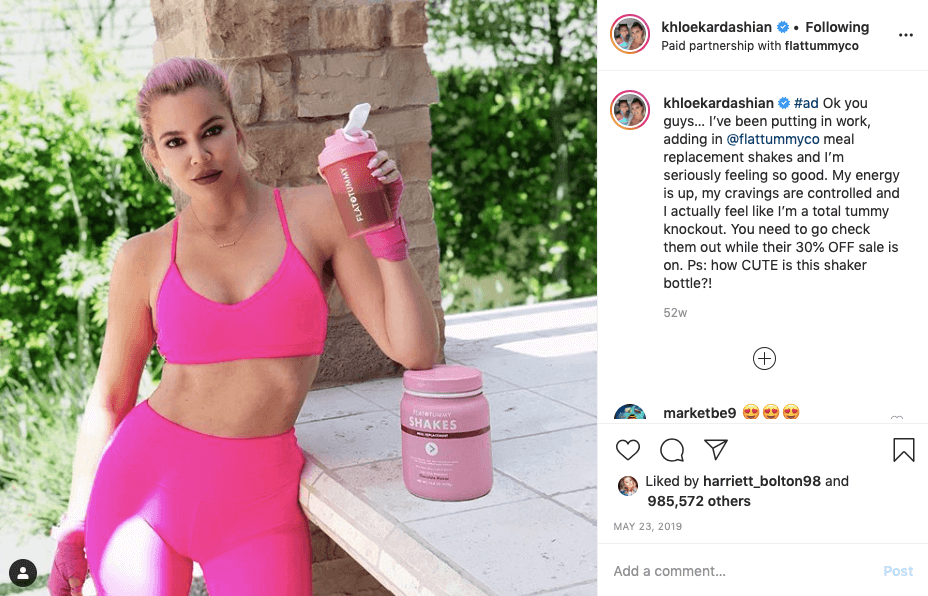 When you have a considerably large following on your Instagram, it leads to becoming an influencer. Khloe Kardashian is one of the most famous people in the Kardashian/Jenner family and has over 112 million followers on Instagram. Whatever she promotes on this account will reach over 100 million people who will be easier to influence buying into the brand due to being fans of her themselves. Controversy comes with a lot of these ads due to it being about food supplements and argued that it’s not healthy.

As you can see Khloe has clearly stated that it is a ‘paid partnership’ with the company ‘flattummyco’. This is a must now due to the underlying rules on influencing, “if they fail to comply with the agreement reached with the CMA, they could be taken to court and face heavy fines or prison sentences of up to two years”.

This is to make followers fully aware of when someone is being paid to promote a product. This post is the average influencer styled post, you have the product in the photo with the influencer, they write about how much they love the product and that people should go by it and finally, they will mention a promotion or show their own promotion code.

I thought what better way to see what people really think of influencers and how often they follow them, but by creating a survey for thirty people to fill out, these were my results:

When looking back at my research it was clear how many people go on their phone every day and how large the audience on social media can get. 75% check their phone more than 15 times a day, that shows how many people see all the advertisements without even noticing it. My research also demonstrated that 85% say that they wouldn’t buy brands because a celebrity was linked with them, which goes against the whole point of influencers being a key part in product sales. However, it says roughly “Businesses earn $ 6.50 for every dollar invested in Influencer Marketing.”  So surely many people are buying these products either because an influencer has recommended it or used one of their promotion codes. Any business would invest into influencers when the outcome can be that great. So surely it must be a good tactical move to make.

In the urban dictionary the top definition for the word influencer means; “A word instagram users use to describe themselves to make them feel famous and more important when no one really know who they are or care, usually the type of people that call themselves foodies and post pictures of their avocado and toast cause they can’t really do anything else interesting, usually also post their last holiday asking someone to #takemeback“

Personally, I couldn’t disagree with this definition any more than I do! To me the word influencer has the word influence in it and describes the job role pretty well. An influencer knows that they hold quite a lot of power when it comes to recommending products or whether it’s because someone likes their style. Their job is to influence, whether you agree with what it is that they are influencing is a whole different matter. Influencers know that they can sell products just from promoting them and that is why businesses pick to go down that marketing route because they do MAKE MORE MONEY! These influencers make the money they do because of their following and other companies knowing it’s a way to get their brand off the ground and sell much more products.

When concluding the information I have found out through my research and the way influencers are used, it is safe to say it is a very clever tactic and many businesses do increase product sales because of it. It is one of the greatest investments that a brand/business can make, all they have to do is send these influencers some free products and pay them an amount of money to reach out to millions of people and have a well-known target audience. This is the start of the new generation of marketing, these online sources are used and viewed more than many print or broadcasted options, and soon enough the majority of brands with be using them instead of the other outlets for marketing. I believe that this is just the beginning of the online era of marketing and that it will carry on escalating as time goes on.

“It’s much easier to engage with customers, respond to a sudden crisis, and communicate effectively with your audience on social media than on any other online channel.“

If it’s not broken don’t fix it! Businesses are doing the right thing by using minimal effort to get large results and high amount of product sales.

Here I have asked public relations student and Sony Pictures intern Harriett Bolton on her views about influencers and businesses that use them.